The use of comparative ads may have started as early as 18th century England. However, comparative advertisements can be found in early twentieth-century advertising, and they typically portrayed competitors’ products as unhealthy or harmful. Throughout the twentieth century, many U.S. advertisers fought comparative advertising wars which grew increasingly hostile over time, created problems for the media delivering the advertisements, and raised concerns about potentially misleading advertising. Eventually, disparagement and the validity of comparative claims seem to have driven media advertising self-regulation policies. One of the first U.S. comparative ads dates to the 1930s wherein prospective automobile buyers were encouraged to “Look at all three” major automobiles before making a decision. Industry-wide self-regulation was mentioned rarely beginning in the 1930s. In the 1960s, comparative ads started to identify competitors by name and comparisons to “Brand X” almost disappeared. Prior to the 1970s, comparative ads identified competitive brands as “brand X” or the “leading brand.” (Barry, 1993)

The Federal Trade Commission (FTC) in 1971 began advocating and legitimizing the use of comparative advertising in national print and broadcast media. The FTC felt that direct comparisons would enhance the quality and quantity of information presented in messages for consumers, advertisers, competitors, and the advertising industry. In particular, comparative advertising would provide useful price and performance information to consumers, would help businesses carve better market positions, would help consumers evaluate competitive alternatives, and would be an incentive to producing better products and services. The FTC’s (1979) position is clear: “Comparative advertising, when truthful and nondeceptive, is a source of important information to consumers and assists them in making rational purchase decisions). By the 1990s, even though networks reduced their clearance staff, comparative ads grew substantially especially in telecommunications, beverages, and automobiles. During the twentieth century, the main problems with comparative advertising were simple disparagement, leading to advertis.

In the quest to gain a competitive edge over rivals, many a company has resorted to what have been perceived as underhand methods, with damaging consequences for its image when the truth emerged. At the same time, other businesses have done well out of publicly knocking their rivals, proving that the right kind of negative campaigning can pay dividends. 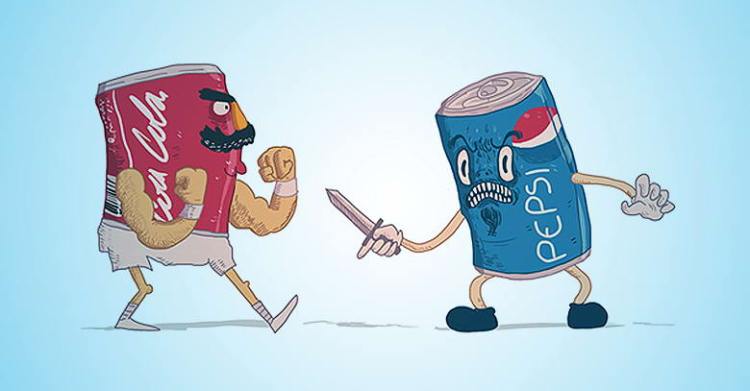 A Pepsi commercial actually got banned that illustrated a young boy who stepped over cans of coke to get a can of Pepsi from a slot machine. The commercial, although done extremely subtly, seemingly criticized Coke and was not appreciated at all by the brand’s loyal consumers.

An extensive research on Pepsi and Coca Cola observes that they have always been in undeviating competition throughout the world to grab market share. Pepsi did a tagline in one of their in house commercials declaring, “PEPSI saved you, what does COKE do?”

The censors did not allow the commercial to be shot and aired on television!

Another widespread belief is that through comparative advertising, brands end up advertising their competitors and risk getting tangled in negative collision in the process.

Advertising research commonly finds that a majority or a large minority of the audience may end up believing that a brand’s competition is the one being advertised in such campaigns, with large amounts of money being spent on promoting a competing brand.

Audi got to face the wrath of BMW loyalists in a commercial that compared Audi’s superiority to BMW. BMW supporters provided very vocal mileage to their beloved brand that cost Audi a whole campaign. The result was that, BMW retained its slot as the best luxury sports car, regardless of Audi’s claims. How does this advertising strategy affect potential customers?

Apple is a prime example of this. By creating the “Mac versus PC” commercials that give clear variations between Mac and Windows products, Apple was able to take a small bite out of the leader’s market share, successfully.

Of course, those ads aren’t the only thing Apple has been doing right; the brand’s beautiful and unique technology speaks for itself there!

Another example is of Ariel and Surf Excel. The latter demonstrated in one of their commercials that Surf can remove stains in just one wash, while Ariel lacked this quality.

Comparative advertising may prove to be clutter breaking, but repetition makes it tedious and excruciating. Also, it easily becomes unethical and unprofessional, with superficial claims being made by advertising brands. It is not easy to believe that a brand that needs to compare itself with its main competitor will be without any fallacies of its own. Why compare if they are better than the best? In a nutshell, comparative advertising adds to the perception and equity of a brand if it is able to bring out the best in it, if it’s following laws, guidelines and creative advertising techniques.